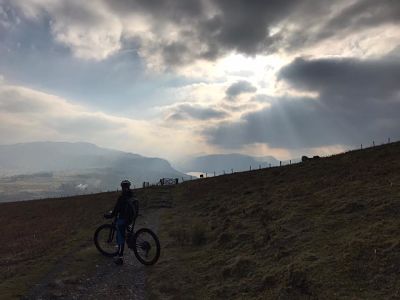 What a winter so far, it continues to be cold, very cold or cold and wet or cold and snowy. Thankfully, the nights are getting noticeably lighter and my mood is enjoying the stunning winter sun that compliments a bright and frosty morning. Why should I care? Because I’ve been training out in this weather with more time and volume than I’m accustomed to and its been hard. Back in June 2017, I entered Cape Epic via the lottery system. Aware of the enormity of the task and still reeling the effects from the off-road event “Transpyr” the Pyrenean coast to coast, part of me hoped I wouldn’t get in. A quick check of my junk email confirmed the offer of a place, yikes, its for real.

I’ve done a lot of racing, in different formats, but I’m not particularly experienced at stage events. Transpyr was a last minute agreement, kindly offered to me by an injured friend, with only a month to go, I wasn’t prepared and I suffered. I still dread that suffer now. This year’s Cape Epic is 658km with 13 530m of climbing, a little shorter and less height gain than previous years, but I doubt I’ll be thinking that once out there… For those unfamiliar with it, it’s a race, ridden in a team of 2, over 8 days, off-road in South Africa. It first ran in 2004, and has now become massive, attracting the fastest riders in the world. Unfortunately, this is complimented with an enormous cost, I can’t help but feel like a bit of a mug entering and paying the fees, it’s completely off the scale of affordability. It has been very tough financially, I must try harder to get an entry sponsor in the future!

The initial objective was to race hard in the women’s pairs, perhaps a top 10 might be possible, who knows. In January, my racing partner Maxine, unfortunately had to withdraw with an injury. It left me with two options – pulling out too – no guarantee of a refund, or finding another race partner. After some hard winter months of training, torturous and lonesome Christmas rides, and small sacrifices on the way, I figured I needed to do this. After a chat with Garry Palmer of Sportstest, we then had Michael Leather coming to the rescue!

Michael has always had a passion of following the Cape Epic stories and he’s a fan of Sally Bigham and her account of her races. He’s also a very capable rider, completing the Tour De France route twice and was already training for a third go this year with his Tour de Force crew. There was one issue, as I like to call him a he’s “Pro Sportive Rider”, he’s not really a mountain biker, or a racer… No matter, the motivation was the key ingredient, he set to work with courageous gusto! Garry had given him a strict training and nutrition regime, whilst I attempted to expose him to the delights of mountain biking, in the North, in the rain, in January. He (literally) threw himself into it, surviving rocks, gravel, and drops. So far he’s done ace, and we both have our final weeks’ of training ahead, with the hardest part done. I’m sure we’ll be fine.

More on kit and stuff soon…