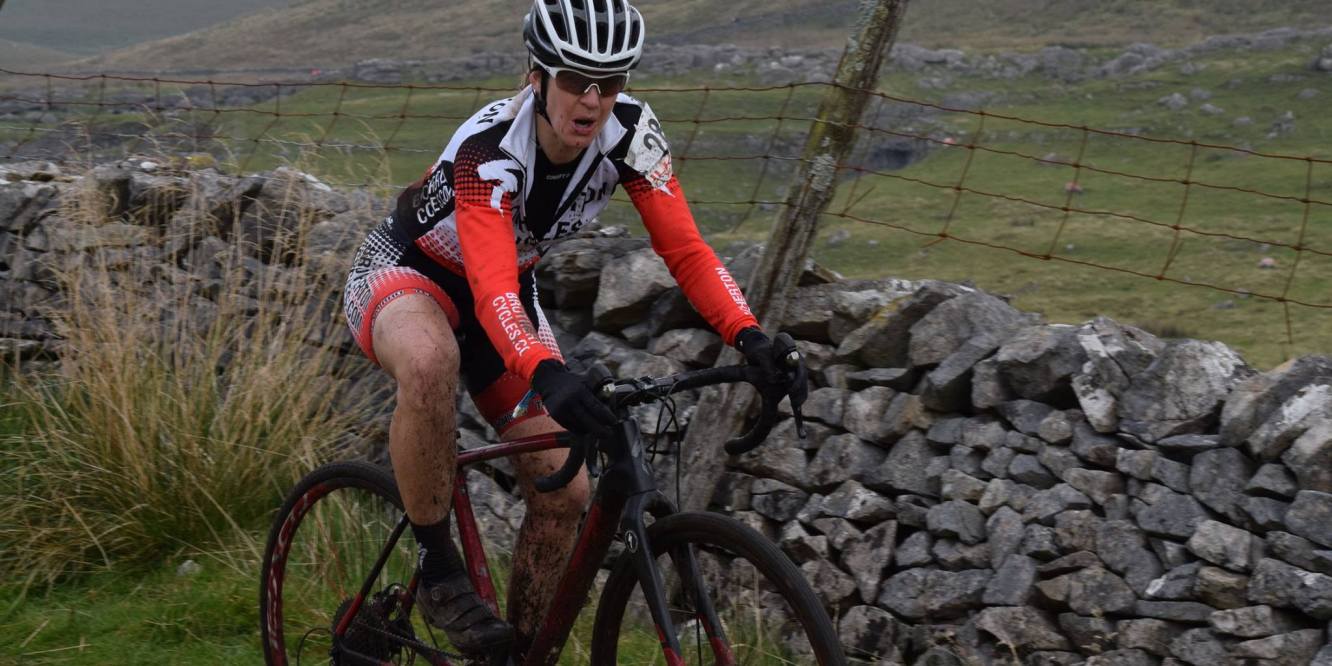 Anything can happen in this event, and generally everything does happen. Its often comical, for example I found myself performing a perfectly timed, synchronised, over-the-bars with some bloke into an Ingleborough bog. I think we even timed our grunts as the front wheel took the impact that then resonated through our chests.

Thats when my sense of humour returned. I lost it on Simon Fell where the race starts for real. As soon as we hit the foot of Ingleborough I was in trouble, heavy rain over the last few weeks meant that we were running early on, this year I thought I was ready, I can actually run/hike-a-bike/yomp. Unfortunately, as I jumped off the bike with full enthusiasm, a niggly calf turned into a big pop, like a little firework going off in my calf. Pushing the bike through the mud, I used it as a prop whilst I thought deeply about how on earth I was going to manage the wall of fell that faced me, never mind finish. I honestly thought I would have to DNF, my mind broke, my leg wouldnt work as it should and the pace dropped off. I nursed it on, I saw Garry, good to see a friendly face, the reality was no-one could help. Some bloke helpfully telling me to stop, “think of the rest of your season!” (errr, I’ll make my own decisions thanks). Carrying on, I problem solved my way up the fell, I took the risk of getting blocked in by the fence but I needed it to pull myself up – I did get blocked in and a panic attacked ensued… Once over both the panic and the hill, I saw another friendly face of Mandie James, she could do nothing to assist but her enthusiasm was helpful.

This year, I went for a very low gear set up, I could spin, and now I needed it most. The goal was now to survive, not a podium. My friends had invested time and effort and so had I! Get to each check point, take it bit by bit. I laughed at myself, crumpled in the bog, from the over the bars moment, now I was back. Despite my inability to keep to the schedule, my friend Alistair was calmly in position as planned. Drinks and fuel on board, I reckoned I could nurse my way through this.

Lacking any punch & quickness, I was slow to react to the techy terrain so I rode smart, stayed on the bike for as long as possible, smooth lines, easy spinning. Off the bike, stepping wasn’t too bad, I could stiffen the leg up, brace it with my left arm, and would use the glutes to pull myself up. I avoided the grassy fell at all costs. I looked forward to the steps of Whernside and with the addition of steps at Pen y Ghent, I thought I could finish this after all.  Descending was awkward but is awkward anyway, and is what I do best, so I’d manage. Almost everyone has their issue at some point, it’s part of it, as I climbed I started picking people off, I was still in this race.

Further pit stops were spot on, my friends and support were all perfect, so nice to see them at each point. Apart from gut rot at the top, Pen Y Ghent climb was uneventful, I just couldn’t push down hard. I heard lots of shouts that I was in 3rd place, blimey, I wasn’t expecting that. With the ridiculous and romantic image that I’m still capable of taking the glory, I started the descent, a bit wild at times with the new quad bike track. Once passed the hairpin, I bloody punctured! So far to go still, virtually 4km to the bottom, I gingerly rode on, the carbon rim taking a battering, tyre totally flat. A spectating friend kindly threw her bike at me (love the cycling community), so grateful for this. I swapped again at the bottom to my own bike.

Loving the crowd attention at the bottom of Pen Y Ghent, I hit the road, with a mini jump off the water bar, thinking yeah, I got this podium! Only to turn around to see Helen Jackson hammering an attack, I responded but she was stronger, the dread filled my stomach as she went passed. One last corner into Helwith Bridge, this was my last chance, I threw myself into it with every ounce of motorbike style lean I could muster, I barely dared to look back, but it worked! I climbed onto the podium for the 5th year running and won the Vets title for the 2nd year in a row. Not quite the ending I’d hoped for but I was pretty chuffed.

My friends have been amazing, and my Yorkshire hosts Mark and Angela Daniel have played a central part. We’ve spent many boring hours discussing ideas and options, and I’ve eaten all their food… Paul at Brothertons has put up with my various demands – the cross tops worked a treat, and I’ve eaten all his food. Emma has run and cycled herself into the ground, I’ve eaten all her food too.. Big thanks to Alistair Jolly for volunteering, I didn’t even ask him to do it this year, but I didn’t eat his food.