Finally done it, thought about for it for years, organising the logistics always put me off, not to mention finding someone to do it with. I never realised until last year that the Sustrans’ Way of the Roses passed through my home patch in East Yorkshire, through the Yorkshire Wolds. So what better way to mark my entry into true middle-age.

Riding for hours on end isn’t my forte – unless there’s a purpose, and here it was. We were blessed with fantastic tail winds courtesy of Storm Gertrude – who also happens to be my Great Grandma’s name (AKA “Nana Gertie”) she’d be 100 years old now. At times, it felt like she was literally pushing us up the lesser climbs, as my friend Rhys said “I feel invincible!” I was to remind him of that quote later on.., in the dark.., after 95miles…into the crosswinds. The route is great and taking in some of Yorkshire’s iconic landmarks, including my much loved Western Yorkshire Dales.

Our itinerary was organised by Mel, we left home for the first train from Birmingham at about 06:30, eventually arriving in Morecambe at 10:15. Once we’d fettled with our Garmins and got lost we started at about 10:30/40, heading for York, where we would stay the night. The following day was York to Bridlington via my mum’s for a pitstop lunch and catch up. Once in Bridlington we had booked a taxi to take us all back home, as the trains were all replaced by coaches on this day – grrrr.

Day 1, approximately 100 miles, was initially sunny, turned snowy, which subsequently turned into hail and started to settle on the road. This became a little treacherous on a particular descent. No issues for the Crux “Evo” and I have to admit I do like it when things get treacherous. I was pretty cold at this stage, and also was aware that it was going to be dark quite soon, so we had better get a trot on. Initially, I thought that carrying my big lights-  Exposure Race and it’s little sibling the Diablo – was excessive but proved invaluable through the dark lanes of the Vale of York. After 6 hours of riding time with Gertrude alongside, we skimmed along, in the pitch black, tired legs on cross bikes & lumbering back packs at 30-31kph. It was awesome!

Day 2, after yesterday’s 2200 metres climbing, today was much easier, at only 600 metres of climbing in 70miles. The full blown, westerly tailwind had disappointingly dropped,  replaced by a meagre southwesterly, carrying with it lashings of rain, stirring up the soiled farm lanes. I’m not sure what I swallowed but it sure didn’t help my digestive system. A stop off at my mother’s for a very welcome log fire and ham and potato lunch. We got to Bridlington in under 4,5hours of riding time. Soaked, filthy and bloody freezing! Good times. 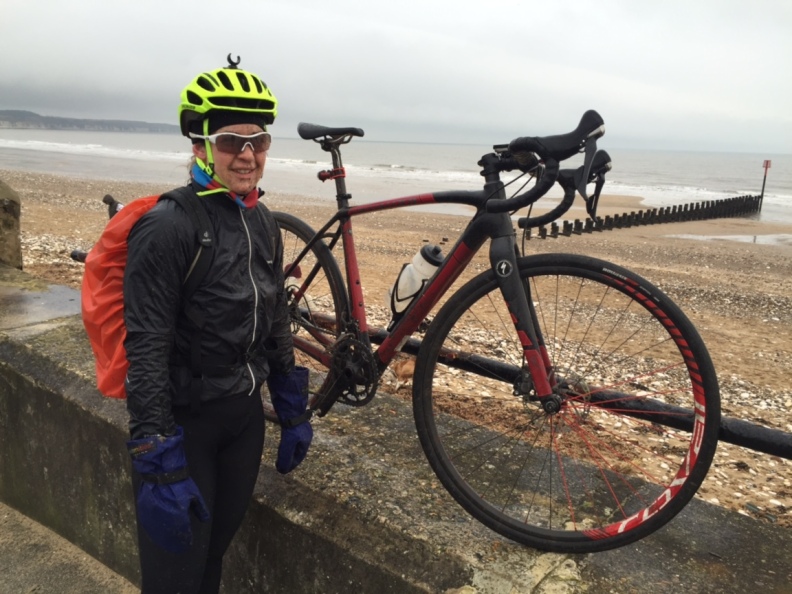