The start was well under way, I rode with the pack, mashing along at silly speeds, I think it might have been Mark Richmond, event organiser, next to me in the fury, who wished me luck “All the best Verity, you and Delia, 20 seconds..” not sure if he meant she was 20 seconds up the road, or a prediction of the finish. He was spot on, though it was Delia and then me, 23 seconds. 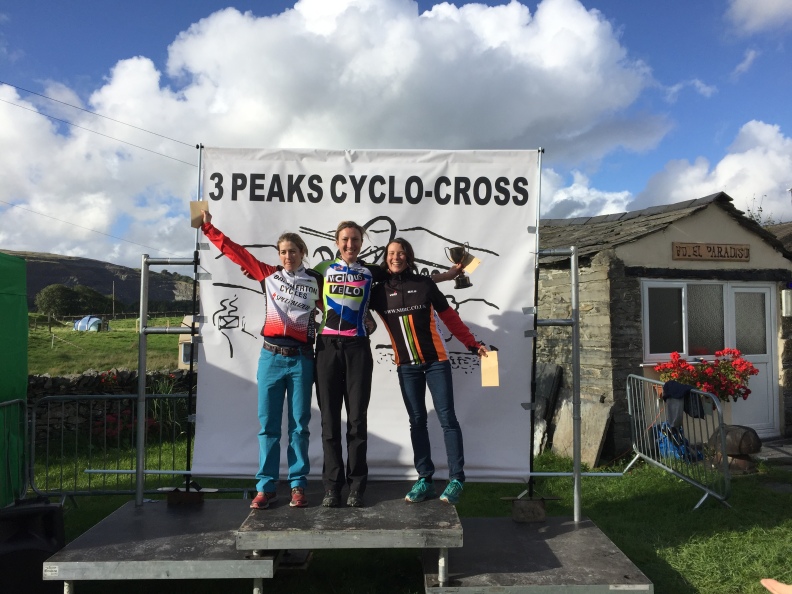 This year seemed hard, though I was ready for it, up for it, couldn’t wait for it. Somehow though, I seemed to struggle, my section times are all slower, I felt the heavy drag of the peat bogs from Ingleborough all the way round. I crashed a couple of times, couldn’t quite let it all out on the descents. I got cold, my hands went a bit numb, braking was haphazard as I lost any sense of modulation. Jaw gritted, I hammered on. Leaving Cold Cotes in 3rd, I feared I was losing contact with second. Jason Miles, of 24hour fame, rode alongside and  gave me a bucket full of morale. Stepping up toward Whernside I went to put on my jacket, as down came an horizontal shower, it had gone from my pocket, not much I could do here. Descending was tricky again, flapping about on my brakes, normally this is where I can really make up my time, not this year. Smashing over rocks, bunny hopping the drainage channels, drifting over the lose gravel and water crossings for 25 minutes, there is nothing that comes near to this in this country for a long and thrilling technical descent. It is bike handling to it’s absolute core.

Chasing for 2nd place, Sarah Barber, I spotted her on the side of the path, I felt for her as she repaired a mechanical, no-one wants that. I’m feeling pretty grave at this point and my helper had to give me her jacket, which seemed to take an age. On I went, shouting at guys in the way. I passed more friends/helpers, dropping gels with my useless hands. Hitting the road, there’s nothing you can do but hammer it, wondering if you’ll ever get up Pen Y Gent. But I did manage, in the fastest time I’ve ever done it. I had no idea at this point that Delia was struggling. As I descended, once again, I was dealing with cold arms/hands – I have no idea why but I gave the jacket away! Sometimes I didn’t even hold on, just let the bars sit between my hands, with their violent vibrations. I swapped from tops to drops to hoods, anything to stop the burn. I heard shouts that I was making up time, now only 1 minute 20 secs down! With the “nearly finished feeling” I fired up the burners, shouted at more blokes, attempted to nail it. But I never saw her until the finish, she was too good. I only realised how close as we compared times on our little certificate things. I was in shock, I still am!

A bloody brilliant day. My friends and helpers were just perfect. Paul from Brothertons was a virgin at this helper lark, but thankfully he made it without getting lost, always there with bells on. I couldn’t have asked for anything else from all these guys, makes me a bit tearful. Well done to the girls out there, I was happy to be in the company on that podium, Sarah Barber was under 2 minutes from me in 2014, and this year she certainly had me under pressure. Delia Beddis is a class rider, and I’ve never been close to her like this.

Its now time to plunge into depression. Its all over.